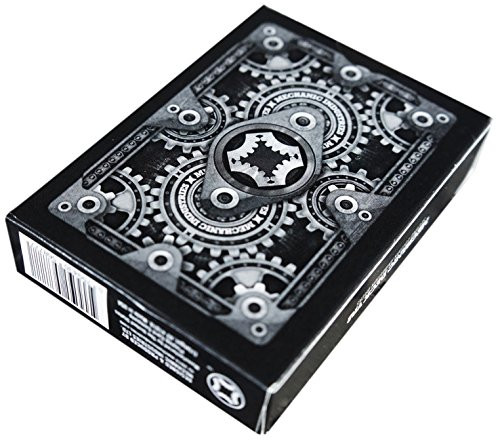 Upgrade fitted! After the success of the blockbuster Mechanic Deck, we decided to take it in for a bit of a service. We didn't want to just give you guys a slightly tweaked 'colour' version, so we completely overhauled the deck with a new design and new custom upgrades making this the best Mechanic's deck yet! The back design looks awesome in spreads and fans thanks to the pop rivets and stepped border, adding interest and variety. The same revolutionary animation system has been applied, but with a couple of extra additions making the animation even clearer, and easier to read as a marked deck. More contrast in the back design means the animation stands out even more! We've encased the chain in it's own guard and added even more cogs to really bring the flipbook animation to life. The deck still uses the same 13 back system but with some additional subtleties. Riffle through the deck and take it for a spin! Doubles up as a marked deck The upgraded animation system now makes the backs even easier to read. We have created two points of reference in the cog rotation making the card value a piece of cake to spot. Now you can divine suit as well as value thanks to a clever little marker that hides in plain view. Impossible for your spectator to see, but noticeable at a mere glance for you, making this one of the easiest to read and affordable marked decks available. FREE PDF instructions are included on how to use it as a marked deck. NEW upgraded design NEW animation system updates NEW box, court card design - Same Bee Stock with magicians Finish - Double backer included Custom Ace and Jokers Now fully marked, value and suit FREE Marked Deck PDF Instructions Printed by USPCC.