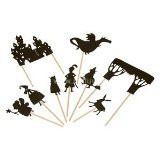 Moulin Roty is a French toy company that had produced award-winning toys for over 40 years, and has charmed the youngest members of millions of families across the globe to date.

Moulin Roty is a tiny communal village in western France founded in 1972 as a quest for a healthier and more rewarding lifestyle. In 1975 The Moulin Roty Toy Company launched 2 toys: a car made of wood and sponge, and a soft rag doll named "la douillette" that charmed everyone with its originality. In 1980 Moulin Roty became a worker-owned cooperative. To ensure the development and the durability of the company, the founding members adopted the status of co-op (SCOP in French) to preserve the founding values of the brand: solidarity, sharing and respect.

Moulin Roty searches for the very best materials, selecting most of their fabrics from France and the rest from Europe because of their design and technical quality, as well as their non-toxicity. (Oeko-Tex certified). All solid wood used, mainly beech wood, comes from forests that are managed ecologically and that respect quotas for felling and re-planting.