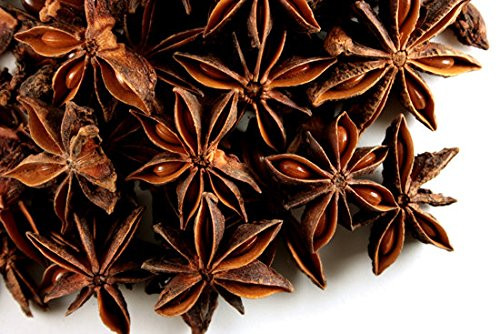 Also Known as: Illicium verum., star anise. In the Philippines, anise star pods are typically called anise, not to be confused with a different herb. To distinguish the herb from Pimpinella anisum, anise star pods are frequently called Badian anise, Chinese anise, or Indian anise. Farming Type: Organic
Origin: China It's easy to recognize anise star pods: They usually look like an eight-pointed star. This fruit of a tree in magnolia family native to China
and Vietnam produces tough-skinned, rust-colored fruits that are picked and dried before ripening. Anise star pods are hotter, more pungent, more bitter, and much more licorice-like than the European anise. Anise star pods are used in Chinese red cooking, where foods are cooked for a long time in soy sauce. The herb is used to flavor marbled eggs and many Asian soups, in Thai iced tea, and in Peking duck. Anise star pods are also chewed after a meal as a traditional breath mint and carminative. Star anise seed powder sweetens the breath and settles rumbling stomach. Note:: Serious complications attributed to anise star pods several years ago were later found to be due to contamination of star anise teas with other medicinal herbs. The whole herb is safe for consumption by all ages, as are ground anise star pods from reliable vendors. In Magick, Anise is ruled by Air and Jupiter. It can be used in sleep magick to keep nightmares away as well as a protective component in meditiation and divination incenses. It is also used in Purification - especially in purification baths and to protect from evil spirits. Keyword: Protection, Purification, Youth

For educational purposes only This information has not been evaluated by the Food and Drug Administration.

This informationis not intended to diagnose, treat, cure, or prevent any disease.